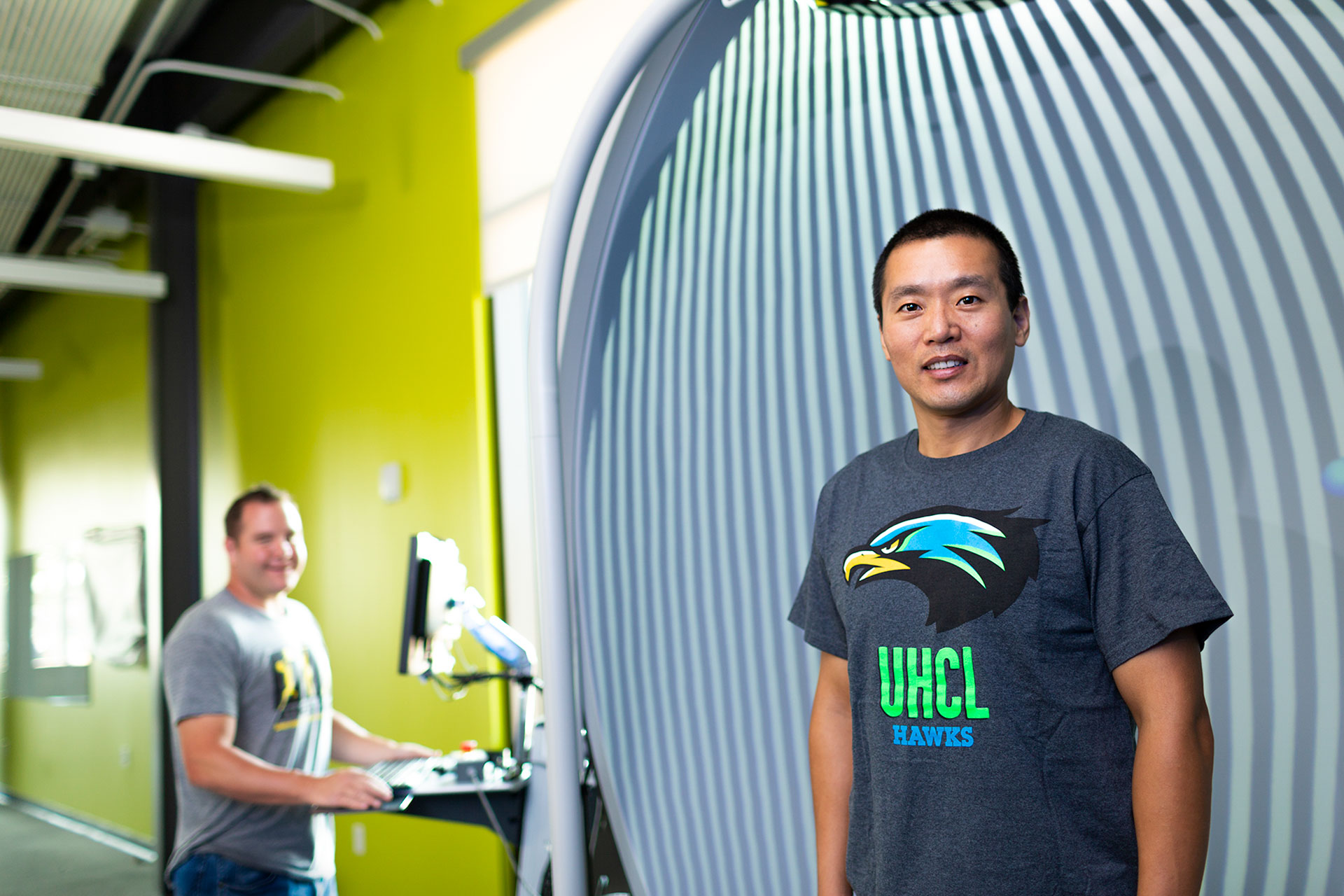 Junghai Xu met University of Houston-Clear Lake’s Associate Professor of Exercise and Health Sciences Bill Amonette in Beijing, when Xu acted as an English interpreter for him during his tenure as a strength and conditioning coach for the Chinese National Basketball Team. At the time, the team was preparing for the 2006 International Basketball Federation world championships in Japan. In return for Xu’s assistance, Amonette shared his knowledge about weightlifting, brought him to UH-Clear Lake to begin his own future in the same field, and became lifelong friends along the way.

“I had been lifting weights, but I had no knowledge how to do it the right way until I met Bill,” Xu said. “I remember we were stuck in France in the airport, going to a tournament. We sat and talked about UHCL and that’s when we started planning my future.”

Xu, who had a background teaching physical education in China, was very interested in strength and conditioning, but “there is no program to do this in China,” he said. “That’s why it was so exciting for me when I met Bill.”

Xu came to UHCL to begin his master’s degree in fitness and human performance in January 2009. “I adjusted really well and my professors, especially (Associate Professor of Fitness and Human Performance) Terry Dupler  and (Professor Emeritus of Fitness and Human Performance) Eugene Coleman. They were all so helpful,” he said. “It was the first time I was in the U.S., and Bill picked me up at the airport and I stayed at his house. During International Student Orientation, everyone was so welcoming.”

Xu completed his degree in December 2010. Because of Amonette’s professional connections, Xu was able to secure an internship with the Houston Rockets. “I got my Certification as a Strength and Conditioning Specialist, and it helped me to get an internship with the Rockets, it gave me a very good reputation in the field,” he said.

“When I returned to China, I was hired as the first Chinese national to ever become a strength and conditioning coach for the national basketball teams. In the past, they always brought in a foreign coach because they do not offer this education in China, but I had the training. It was all because of the education I got from UHCL.”

Xu coached the under-18-year-old boys’ national basketball team in China, training for national Asian championships as well as world championship competitions. “In China, most competitions are international, not local or leagues,” he said.

Amonette said Xu was one of his most committed, dedicated students. “He soaked up everything in the program,” he said. “He had an incredible work ethic, and he was involved with all the research studies in our lab, and even presented at a national conference and published in an international journal while in the program. He has gone on to do such great things and he’s the kind of person future students should look to for inspiration. I know how far he’s come from when we sat in that airport in France, coming to a country and getting his education in another language, to becoming a future leader in this field.”

Currently, Xu is working toward his Ph.D. in exercise physiology from Louisiana State University, anticipating completion in about 18 months. “I would love to come back to UHCL as a professor,” he said. “I think the new (Recreation and Wellness) Center is going to be wonderful and will help the students develop so much here. I would love to be a part of the future of the program.”