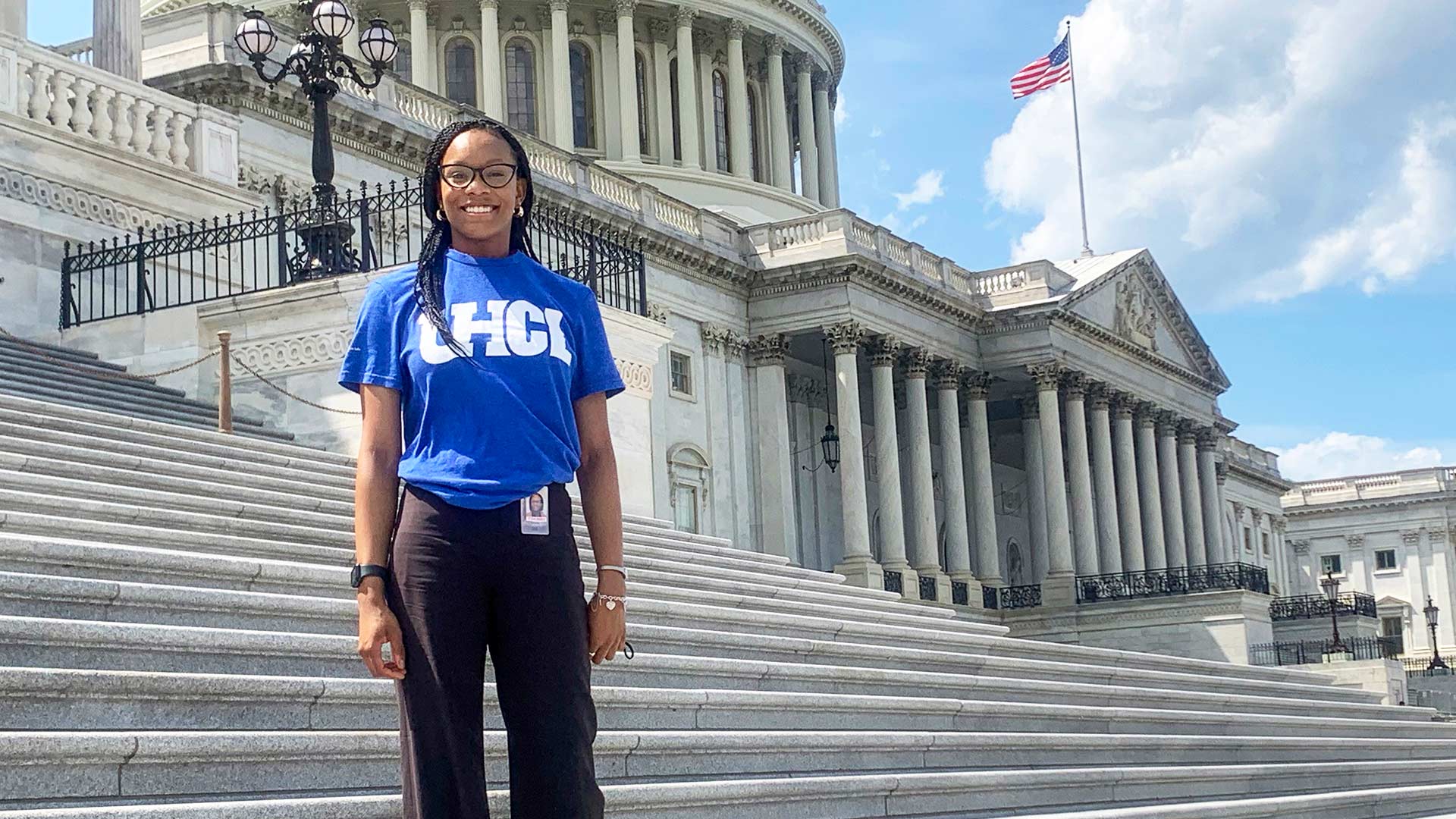 University of Houston-Clear Lake alumna Kaylee Madden just completed her Bachelor of Science in Finance, but has her eye on a future in politics and leadership. That's why in 2020, she started the university's chapter of SUPERGirls SHINE Foundation, a nonprofit organization aimed at exposing young women between the ages of 10-17 in underrepresented communities to leadership opportunities through mentorships to pursue STEM-related careers.

She became a member of the organization's board, as well as a collegiate ambassador.

Now, as UH-Clear Lake's first student to be awarded a coveted two-month internship with the Congressional Black Caucus Foundation, she has both her degree and a desk in the office of Rep. Andre Carson of Indiana's 7th Congressional District at the U.S. Capitol in Washington D.C.

"I got interested in SUPERGirls SHINE because of their focus on making an impact," Madden said. "I was going to go into political science, but because of SGSF, I changed my major to finance. I questioned my math skills at first, but they gave me the confidence to believe I could do it."

She explained that the Congressional Black Caucus Foundation is a nonprofit created to open doors for underrepresented individuals who are interested in politics. "UH-Clear Lake opened this door for me to be here on Capitol Hill," she said. "The CBCF opened the door further."

She learned about the internship through College of Education Dean Joan Pedro and Assistant Professor of Curriculum and Instruction Omah Williams-Duncan, with assistance in completing the application process from Internship Programs Coordinator in the Office of Strategic Partnerships Bernadina Streeter.

Streeter discovered the opportunity and curated the relationship with CBCF for over a year. “This is a big deal for UHCL," she said. "It is the very first time we have a UHCL student/alumna represent our university. My goal is to continue this relationship and create a pipeline for our students to engage in this life changing internship. It is my belief that UHCL has the best and brightest students, and I want to see them succeed as they represent UHCL."

"I'm learning about what goes on in January 6th hearings, as well as attending speaker series and coffee chats," Madden said. "In coffee chats, you invite someone to talk about their profession and learn about what they do. They're also networking meetings that are very informative and inspiring."

She said that before she decided to study finance at UHCL, she had considered law school. "Ultimately, that's what I'd like to do," she said. "Long term, I'd like to go into politics."

With stronger leadership skills and relationships built through networking, Madden said she hopes to become a better public speaker and a more confident person. "SUPERGirls SHINE helped me see the various ways I could help others. Prior to membership, I know I wanted to help, but I just didn't know how," she said.

Starting in the 2022-23 academic year, SUPERGirls SHINE will present the Kaylee Madden Leadership IMPACT award to students who demonstrate leadership, character and initiative to create and make change in the community that results in access and equity for more girls in underserved communities to pursue STEM careers.

"Fewer than 29% of women pursuing STEM careers, and among them only 6% are Black and 4% are Hispanic," said Loretta Gurnell, founder of SUPERGirls SHINE Foundation. "We are looking to leaders like Kaylee Madden to join SGSF to bridge gaps and rewrite narratives for girls and rising leaders to not only pursue college STEM degrees, but become leaders and allies for more girls to reach their goals as well."

For more information about student organizations at UHCL, go online.