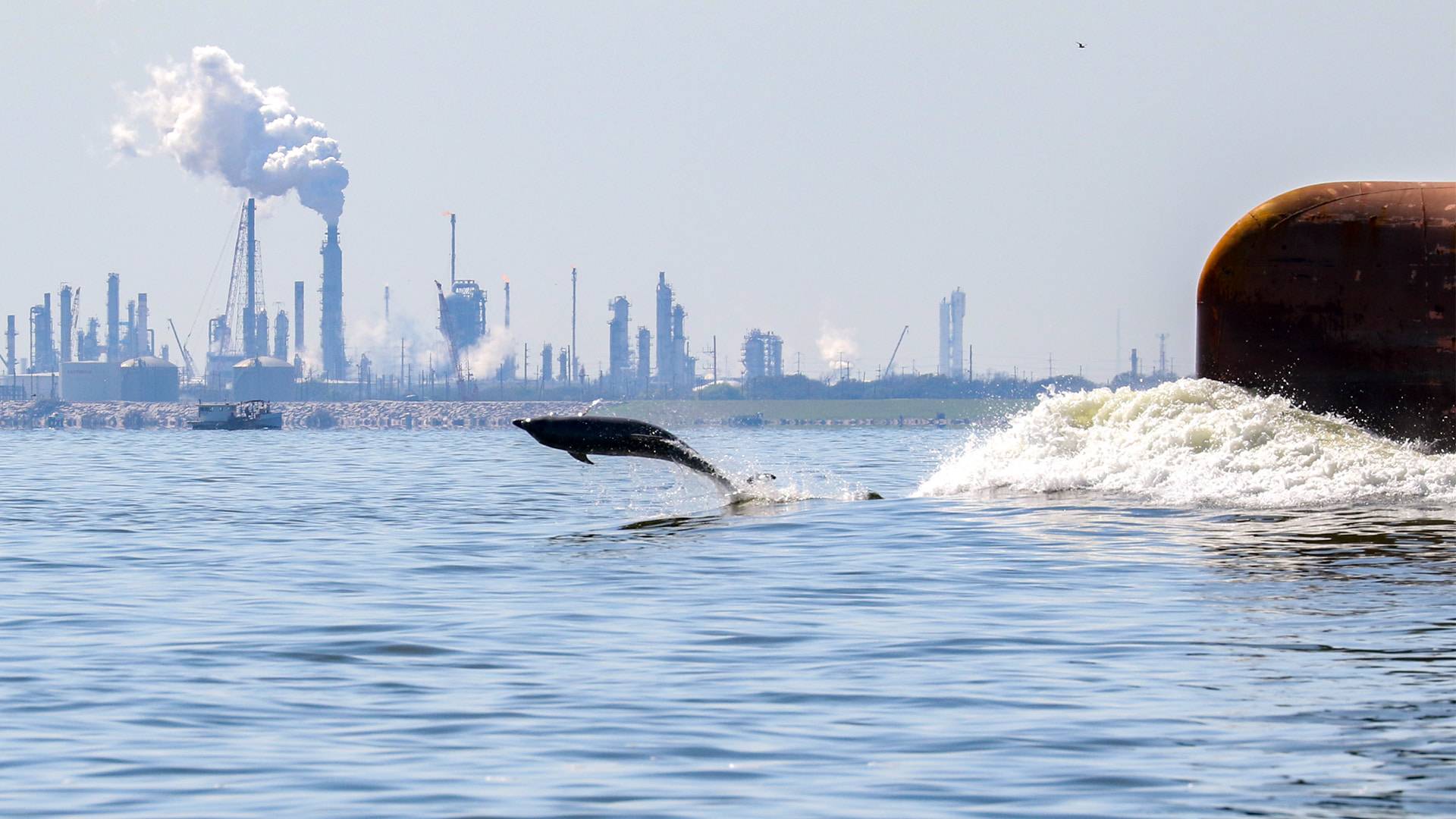 Researchers from the Environmental Institute of Houston at University of Houston-Clear Lake have published an article in the May edition of Estuaries and Coasts special issue, titled Impact of 2017 Hurricanes. EIH Research Associate Kristi Fazioli co-authored “Short-Term Effects of Hurricane Harvey on Bottlenose Dolphins in Upper Galveston Bay, Texas” with Vanessa Mintzer of the Galveston Bay Foundation. The research was completed as part of the Galveston Bay Dolphin Research Program.

The GDRP, a partnership of the Galveston Bay Foundation and the EIH at UH-Clear Lake, has been studying and bringing awareness to the vulnerable bottlenose dolphin population in Galveston Bay through monthly boat-based surveys since 2014.

Fazioli, one of the GDRP’s principal researchers, said that for the last six years, she has been studying a population of dolphins specifically in the upper Galveston Bay area. “We know about other areas of Galveston Bay thanks to prior research from Texas A&M at Galveston, but not much about the upper bay, so our research’s primary focus was to learn about this population of dolphins,” she said. “With our monthly surveys on the upper bay, we have created a long-term data set. This allowed us the opportunity to learn about the environmental effects of Hurricane Harvey on this population.”

Fazioli explained that Harvey had flushed the bay with fresh water. “With that came sediment, toxins, nutrients and runoff from Houston,” she said. “So, we looked at two factors in our research — first, the distribution of dolphins after Harvey, specifically the ‘encounter’ rate. That indicated how many dolphins were using the upper bay, comparing the time just after the storm to the years prior to Harvey. A majority of dolphins left the area after the hurricane, when the salinity dropped very low.”

The dolphins left the area, likely to the Gulf of Mexico or to the lower bay. “We’d like to find that out for sure,” she said. “Some dolphins that remained shifted to the Houston Ship Channel. It’s the deepest part of the bay, and has a saltwater wedge. Dolphins and their prey are attracted to that area,” she said.

Fazioli said that their second focus was upon the dolphins they observed in the area showing skin lesions. “Nearly all of them had lesions. Right after Harvey, when the water was still very fresh, we saw a high extent of freshwater skin lesions in the population,” she said. “When the saltwater levels came back up, the lesions decreased with the higher salinity. Fresh water damages dolphins’ skin, and it’s a visual indicator that something is wrong. We take photos of their skin to document the lesions, which look like white, mottled areas that can have fungal growths.”

She said that dolphins maintain their electrolyte balance through their skin and being in fresh water can upset that balance, causing negative health consequences. Higher levels of fresh water can also cause them to be unable to protect themselves from toxins, bacterial infections, or other secondary infections that could penetrate the skin.

Guillen said that Fazioli and her co-author have collected extremely high-impact data that would help manage marine resources. “Previously, this kind of data was not available,” he said. “We’re getting this because of efforts like Kristi’s. Collecting long-term, monitoring data helps estimate the population size, and look at trends via statistical methods. We can watch what the population is doing, find out what’s causing the fluctuations, and we’re collecting tissue samples that are archived.”
Guillen added that Galveston Bay was a high-risk area, with high levels of pollutants, ship traffic, industrialization in the area and urban runoff.

“There are a lot of factors and a lot of biological stressors that build up and can have multiple effects on dolphins,” Fazioli continued. “Some might come and go, but there are resident dolphins that could spend their entire lives in Galveston Bay and depend on the resources and the quality of the estuary to live and reproduce. Survivability in the long term could be affected, and we need to know how well they are thriving, and what they need to continue to thrive.”

The Hurricane Harvey study was completed with grants from the Gulf of Mexico Alliance, the SeaWorld Busch Gardens Conservation Fund and Emergency Fund, Restore America’s Estuaries, and the Trull Foundation. A major portion of the funds to continue this research are raised through the Adopt-a-Dolphin program at the Galveston Bay Foundation. Funds are used to offset survey expenses and support two graduate students conducting research on dolphin ecology within the Environmental Science program in the College of Science and Engineering under Guillen’s guidance.