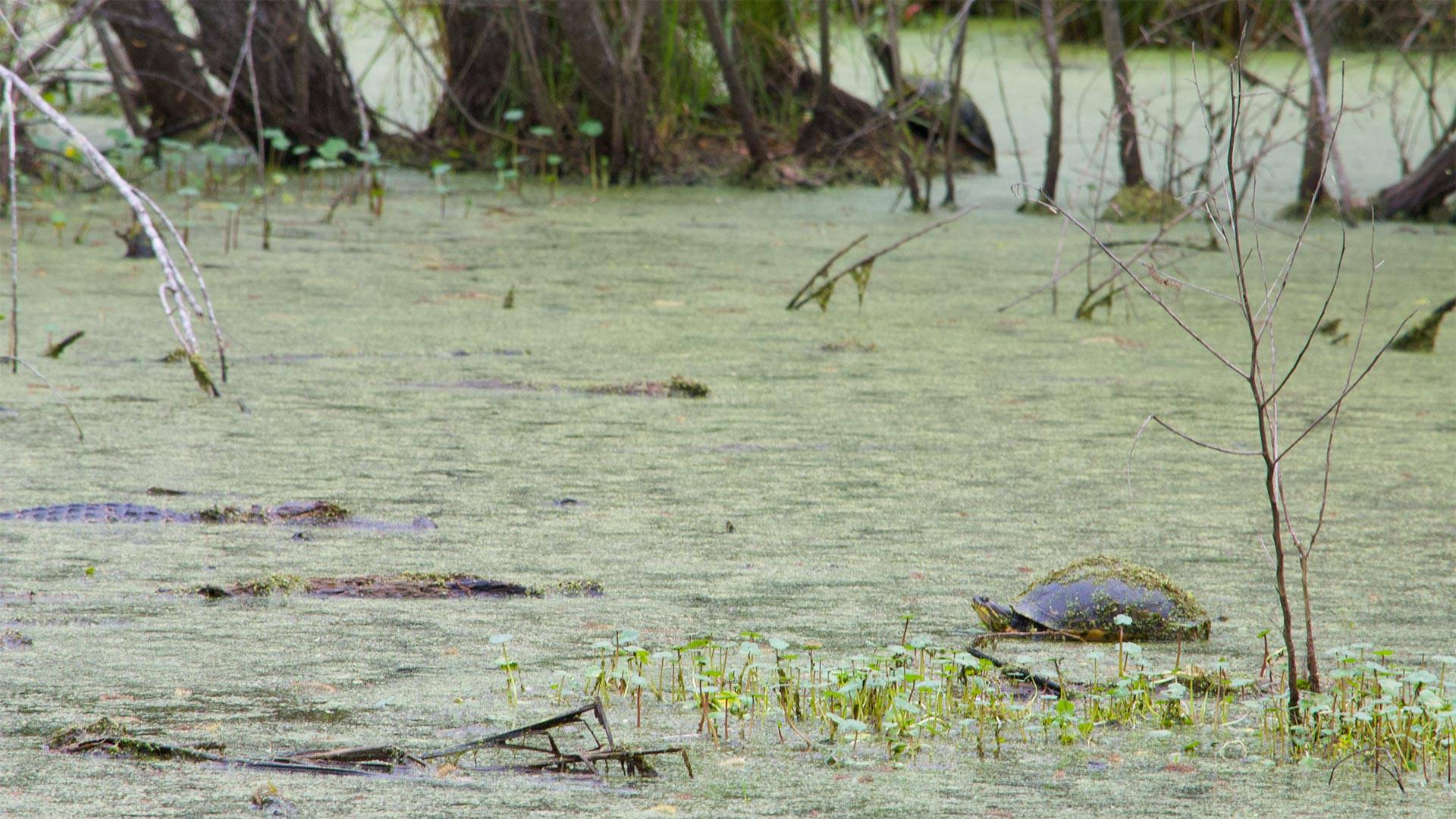 Western chicken turtles are an elusive freshwater turtle found in wetlands in states west of the Mississippi River, extending to the Guadalupe River in Texas. The most pressing problem with the chicken turtles, says Senior Biologist Mandi Gordon of University of Houston-Clear Lake’s Environmental Institute of Houston, is finding them at all.

In 2010, the U.S. Fish and Wildlife Service discovered that due to habitat loss, road mortality and commercial collection, it could become necessary to place the chicken turtles on the Threatened and Endangered Species list. “The U.S. Fish and Wildlife Services reviewed 404 species to be considered for that listing and created a timeline of biological assessments,” Gordon said. “We want to learn as much as possible about this turtle to find out if it should be on this list. Until recently, academia has not known much about this turtle.”

Gordon explained that after the Texas Comptroller’s office made an initial call for proposals for agencies to apply for funding to collect a baseline analysis for chicken turtles, Texas A&M surveyed 107 Texas counties and only found three turtles over the course of two years. “The Texas Comptroller took over funding this project from the U.S. Fish and Wildlife Service because they want to take into consideration the economics as well as the environmental impact when a species is listed on the Threatened and Endangered list,” she said.

EIH Executive Director and Professor of Biology George Guillen said that the Comptroller’s office sometimes ends up listing a species simply because there’s no information about it, and what’s available shows it’s rare, so it ends up on the list. “Texas A&M used physical capture methods that are time intensive and physically intensive,” he said. “But those methods might not be applicable to this species. The Comptroller’s office is offering funds to collect data in a new way, and this is where EIH comes in.”

He said that EIH answered the Texas Comptroller’s request for proposal that incorporated novel sampling techniques along with traditional ones. “They liked that, and we’re trying to add to what Texas A&M compiled and found out more about the chicken turtle’s habitat and distribution.”

Gordon, he explained, was using environmental DNA techniques that are traceable back to that turtle. “It’s a new technique that allows you to determine that somewhere nearby, there’s this turtle species. You can look for them when you can’t see them,” he said.

“Our main method of detecting is using eDNA, where we go to an area where we don’t actually see them, but we take some of their environment and run genetic analysis against it with primers specific to the species and see if we find their genetic material in the samples,” Gordon said. “We take samples of ambient water, stirred water and soil.”

The chicken turtles have incredibly long necks, which as ambush feeders, they can extend a long way out. And because they are small, live in smaller populations and have shorter life spans, Gordon continued, they have an increased perception of rarity. “To add to that, they ‘aestivate’ — stay buried in the mud — for up to eight months of the year before emerging,” she said. “It’s not easy to look for something that stays buried in the ground for a very long time.”

Guillen said the data they collect will be submitted to the Comptroller’s office, and they would continue working with them to submit a final data set to U.S. Fish and Wildlife Services. “We’re currently collecting data and our goal is to sample each of our 87 sites once a month for four months over the course of this study, this year and next,” Guillen said. “We have sampled 27 sites this year and we have positive eDNA detection at four of those sites.”