Painter spotlights the 'art' of decimation of Iraqi, Kurdish culture 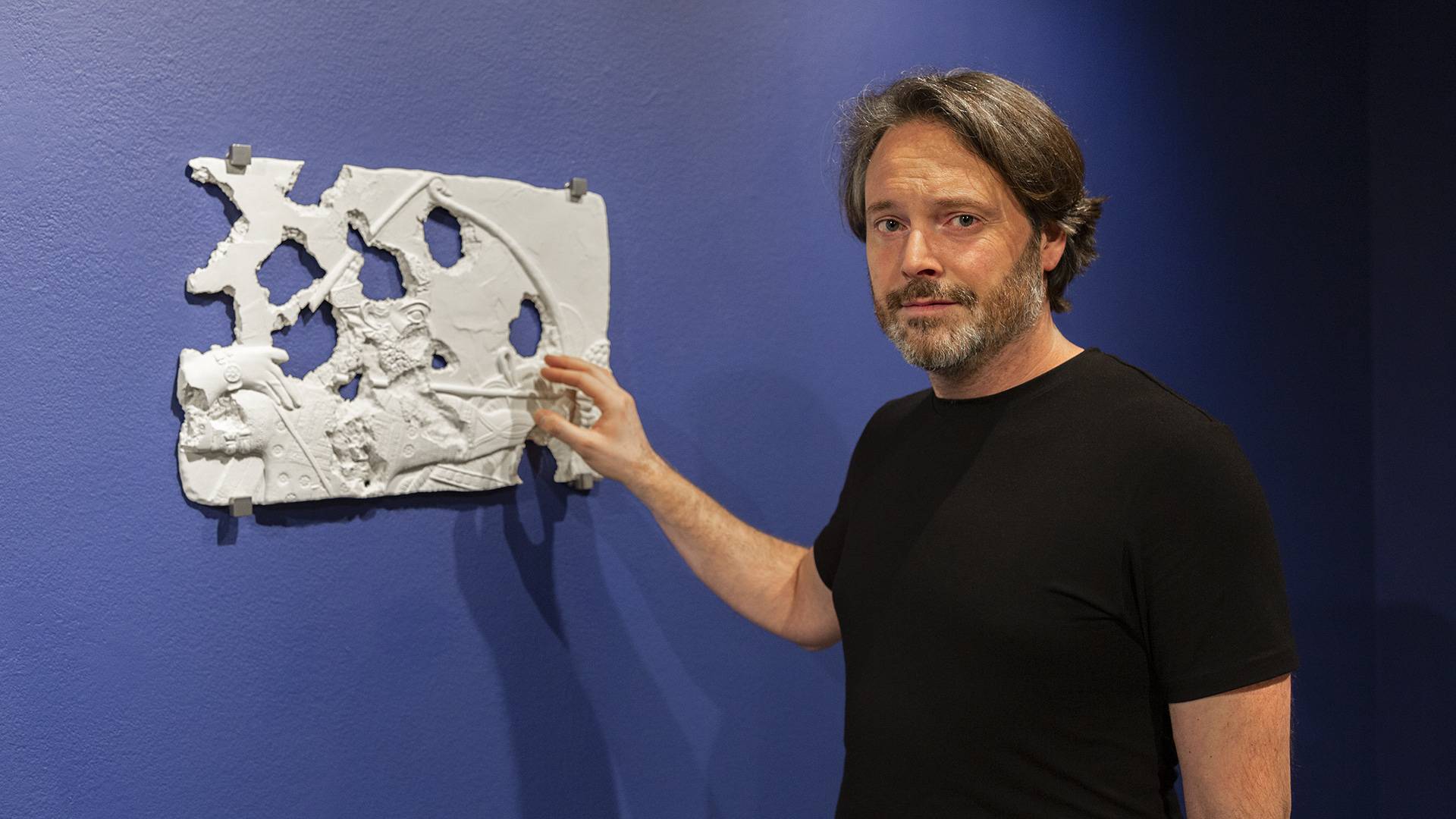 Where there is war, there is widespread loss of life and property. But in modern history, few antagonists have made such a calculated effort also to destroy every trace of their victims’ culture as ISIS, who has methodically destroyed countless historic artifacts in their quest for dominance in Kurdistan and Iraq. University of Houston-Clear Lake’s Art Gallery is currently exhibiting a collection by New York-based British artist Piers Secunda titled “ISIS Bullet Hole Paintings,” exploring the epic scale of cultural destruction the terrorist group has wrought upon that region.

Secunda uses paint to create casts, or moldings, to meticulously recreate a deeply disturbing record of the damage ISIS has done to ancient art in the Middle East, specifically Iraq. He uses the paint on its own, as a sculptural material to construct forms or structures that ISIS has destroyed using sledgehammers, power tools or fire.

“I travel to places where ISIS has done its worst, then create the molds and leave a site with 30 or 40 molds in my bag and return to my studio,” he said. “I don’t make the bullet holes. ISIS has done that. I’m documenting what it looks like and integrating it into works for art. It’s a very high-level reproduction of the damage they’ve done, and it’s a document of what happened.”

Of the 23 drawings, paintings and other artifacts in the exhibition, Secunda said that one piece, titled “Assyrian Archer,” had a particularly fascinating story. “The person portrayed in this piece is Ashurbanipal, king of the Assyrians at the peak of the Assyrian Empire, which at that time reached from modern-day Iraq to Egypt,” he said. “At its height, around 120 B.C., the Assyrian Empire was vast, enclosing Egypt. It was the biggest empire the world had ever known at that time, covering the majority of the known land mass — what we now call the Middle East, Turkey, the Mediterranean and North Africa. These were the most culturally advanced populations of the world.”

Ashurbanipal built a palace complex in the north of Iraq called Nineveh. “This was an extension of Ashurbanipal’s father’s palace, and Ashurbanipal had diverted huge funds into making many miles of Assyrian carvings which told the stories of his family’s conquests,” Secunda said. “They were propaganda that described how wealthy society was as a result of his leadership and management, but in reality, his conquests of people and nations outside the Assyrian Empire were so ferocious, it caused an uprising of tribes who united and successfully brought about the end of the Assyrian Empire.”

The uprising ended, continued Secunda, with the burning of the palace and city of Nineveh, including a library inside the palace. “That library contained thousands of cuneiform tablets. When the palace burned, the tablets were actually fired by the heat and preserved,” he said. “Among those tablets was a modern version of the ‘Epic of Gilgamesh.’ At one stage in the story of Gilgamesh, a goddess threatens to make the dead rise and eat the living — this is the first instance of zombies in literature!

“The ‘Epic of Gilgamesh’ is about 4,000 years old. From Ashurbanipal’s palace, we have the stories of the expansion of the Assyrian Empire, and the development of siege engines. These stories explain why Iranian horses were so highly prized by them. Most of the horses used by the Assyrians in war were from ancient Persia,” he explained.

Large parts of Nineveh have not yet been excavated. “Archaelogists who work there frequently find incredible sections of relief carving. Those carvings go from the floor to 6-7 feet, extending for miles. But in 2014, ISIS took over Mosul, and Nineveh is inside Mosul,” he said. “The Mosul Museum contained a considerable number of relief carvings and important Assyrian and pre-Assyrian objects, and ISIS took everything they could. The sculptures that were too big to remove were destroyed with sledgehammers or power tools.”

Secunda said his purpose in creating this piece was to enter the Mosul Museum and document in his own way what ISIS had done to the sanctity of the museum space, which was designed to preserve history for humanity. “This is a reproduction. The original is in the British Museum in London,” he said. “I made a reproduction of it so I could portray Ashurbanipal in a historic context through the lens of my experience in Mosul. Many miles of it have been desecrated at the hands of ISIS, so the work I have created serves as a metaphor for the destruction of culture and a warning from history.”

The exhibit will run through Dec. 18. Read more about UHCL’s Art Gallery and Secunda’s exhibit online.