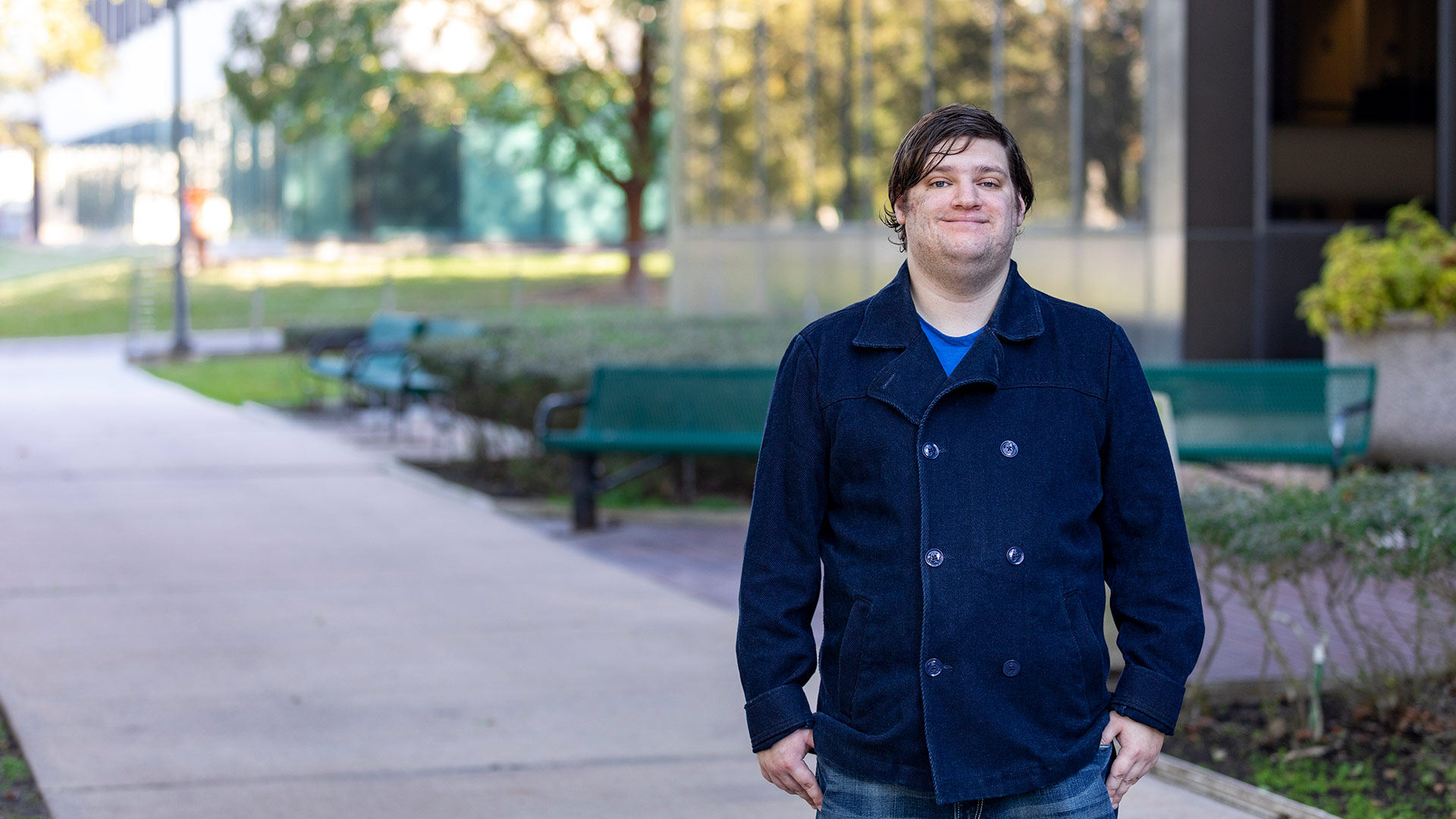 Rhys Griffin may look like a grown man, but don't be fooled. When he was a kid, he dreamed of telling stories through films or on pages with colorful illustrations. "I grew up on children's books and shows. Most people grew out of them, but I didn't," he said. "My interests have expanded, but I still love those books and shows."

Griffin, a 2017 University of Houston-Clear Lake alumnus with a bachelor of arts in communication, said he uses his skills as a content creator at Spectrum Fusion, a Houston-based non-profit organization that helps connect adults on the autism spectrum with others in the community to receive mentorship and work experience.

"This means that if you're interested in a certain field, Spectrum Fusion will help you get connected to people in that field," he said. "I identify myself as an adult on the autism spectrum. I'm on Spectrum Fusion's media team. We work with clients to provide promotional video, writing, editing, and sometimes animation or live action segments that we do in our studio."

He said he's also a voice actor, doing voiceovers and narration for some advertisements, occasionally even adding a funny or silly voice to an ad.

Griffin said he wanted to keep creating new stories and decided to try putting some of his ideas on paper with illustrations, so kids could be encouraged to read.

"I've written two books, both sponsored by Spectrum Fusion, who also helped with printing costs, distribution and publicity," he said. "'Tucker and the Christmas Train' was published in 2020, and 'The Hungry Lady and the Bear' came out this year," he said.

He explained that sometimes, children on the autism spectrum have a lot of fears, but even if they conquer their fear once, it might not be completely resolved. "You have to be patient with kids on the spectrum," he said.

"It can take some repetition to get fully comfortable with something that is a fear. The 'Tucker' book is about a steam engine that longs to pull a big train to and from the North Pole," he said. "But when he gets his chance, he finds it's not as easy as he thought. It's a lesson in perseverance."

The second book, he said, is more of a silly story. "There's a lesson about being nice to animals and it has a fun resolution, so it's more about giving kids a laugh," he said. "It's just a silly story that I think kids will love."

Both books were illustrated by artists also on the autism spectrum.

Although it had been difficult to find work after graduating, Griffin said that his education at UH-Clear Lake, along with the knowledge that his professors believed in him, helped him find success. "I definitely got what I needed at UHCL," he said. "I recommend others to look at UHCL to get ahead in their dreams. My professors helped me learn to communicate and they believed that I could do the video work, and I'm doing it now. It's a great school and a great community."

Now, he said, he's made great friends and coworkers since starting at Spectrum Fusion. "They have helped me publish my books and gave me what I needed, including finding great illustrators, to get my books out there," he said.

Both books are available for order online. For more information about UHCL's Communication program, go online.