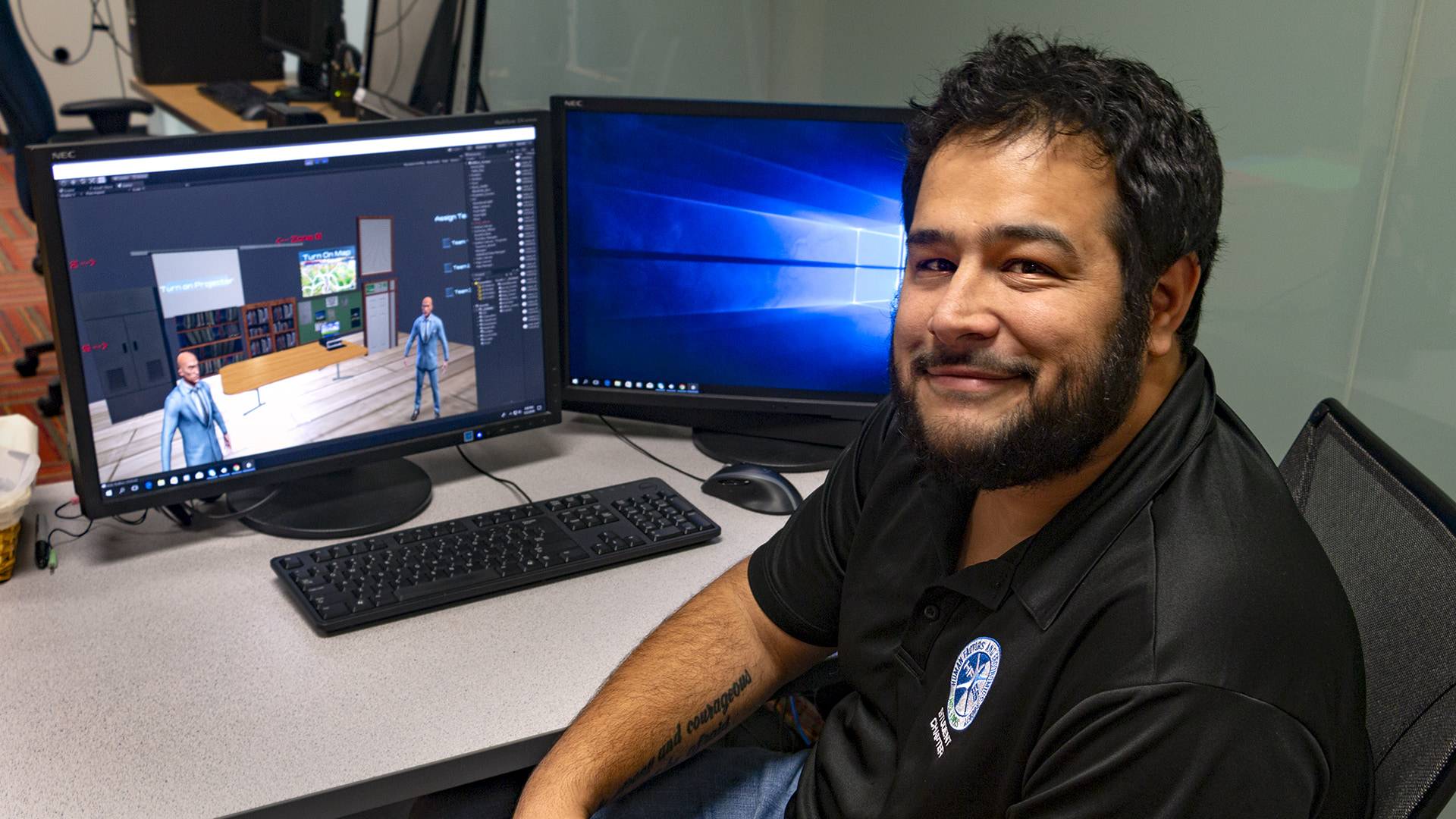 Will Althoff will be receiving his Master of Science in Psychology with Human Factors Concentration in December.

When Will Althoff got out of the Army, he enrolled at University of Houston-Clear Lake, unsure about whether he would find the same sense of belonging as he did while in the military. After taking (Lecturer of Literature and First-Year Experience) Wanalee Romero’s First Year Seminar class, he became a peer mentor, a teaching assistant and ultimately started working in the Human Factors and Ergonomics research lab that led him to find his career aspiration in human factors psychology. He will receive his Master of Science in Psychology with Applied Cognitive Psychology Concentration, or Human Factors psychology, in December.

“I got my Bachelor of Science in Psychology from UH-Clear Lake in 2017, so I’ve gotten two degrees in four years,” he said. “After over four years as a healthcare specialist in the Army, it had been ingrained in me that I was part of a ‘unit.’ When I came to college, I wasn’t sure if the people I met were my ‘unit,” but starting with Dr. Romero in her FYE class definitely helped bring down the barriers.”

Working with Romero, said Althoff, ultimately led to his first chance to work as a research assistant in Assistant Professor of Psychology Steve Sutherland’s lab. “I knew it was a Human Factors lab, and not a clinical psychology lab, but I wanted to learn about virtual reality because at first, it was my intent to work as a clinical psychologist with veterans using virtual reality to create mental health treatments,” he said. “But I quickly learned I didn’t want to do that anymore. I thought studying human factors was fascinating, especially how Dr. Sutherland approaches research with the use of serious games and video games.”

Althoff said he had pitched an idea to Sutherland to modify an existing research project called “Search and Rescue,” which is a video game where players use an automated adviser system, like a drone, which would surveil a disaster situation and give recommendations about where to send help.

“Using this video game, I conducted research involving decision-makers choosing different zones of a city devastated by an earthquake to find out if specific factors in the environment influenced people to make certain decisions,” he said. “For example, would they be more likely to send rescue efforts to a school zone, even if it had fewer people in it?”

That resulting paper from this research project was accepted at the Human Factors and Ergonomics Society Annual Meeting in 2017 in Austin, with Althoff as first author. “I was still an undergraduate then, and I ended up presenting at two other conferences as well,” he said. “Not many undergraduates get first author publication. It was accepted through peer review with no edits. I’m very proud of that.”

He attributes much of his initial success at UHCL to Romero. “Without her, I would not have met Dr. Sutherland,” he said. “She is the one who gave me the initial opportunity that led to my success as a research assistant for him and for other professors as well.”

Althoff is completing his graduate internship at End to End User Research in Houston, a usability consultancy testing firm. “Different technology companies from around the world contract us to conduct usability tests, look into user experience with different products with the intent of improving them and making a better interaction for customers,” he said. “This is my career aspiration. Human factors is a very diverse field that evaluates that interaction between people and products and technology. This wasn’t my original aspiration, but after meeting Dr. Sutherland, this is definitely my calling.”

Find out more about UHCL’s Master of Science in Psychology with Applied Cognitive Psychology Concentration online.