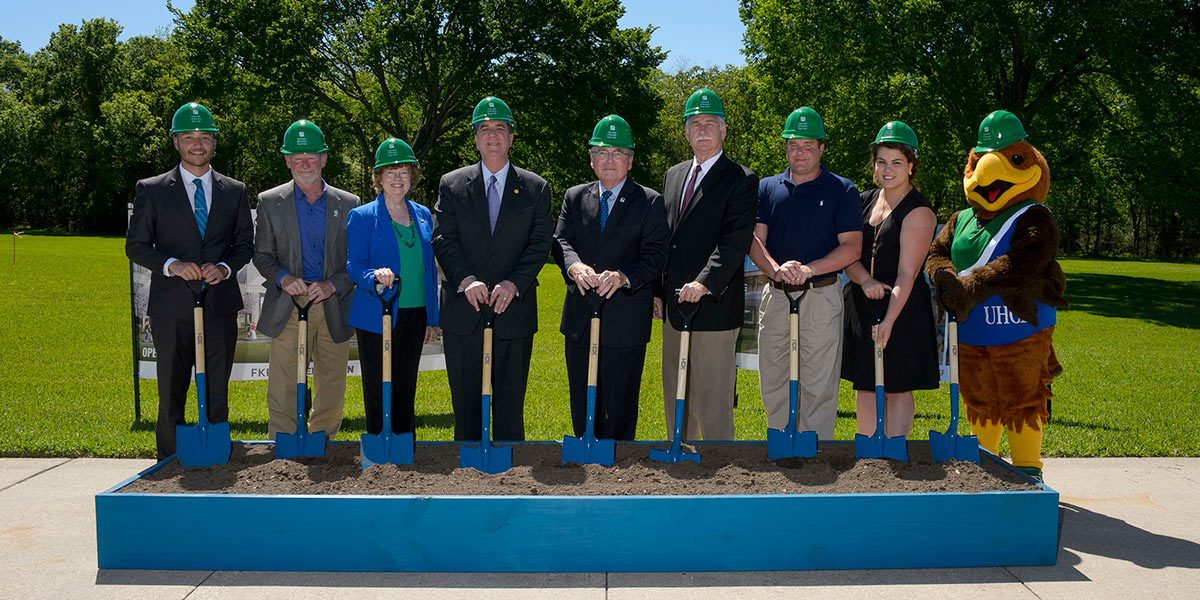 University of Houston-Clear Lake broke ground on two new buildings March 31, which, when complete, will help train a workforce prepared to tackle 21st century careers in the sciences, engineering and health. These construction projects are a significant part of UHCL’s continued development as a four-year university.

Construction will soon begin on a STEM and Classroom Building and a Recreation and Wellness Center. Both are expected to open the fall of 2018.

“This is truly a historic occasion,” UHCL President William A. Staples said at a ceremony that included civic leaders and university administrators, faculty, staff and students.

Nestled within a 524-acre nature and wildlife preserve, UH-Clear Lake opened doors in 1974 as an upper-level university with a mandate to help train NASA’s aerospace workforce and provide academic opportunities to the budding Clear Lake area. In 2014, it expanded its curriculum to include freshman and sophomore courses. Four academic colleges – business, education, human sciences and humanities and science and engineering –  offer more than 80 undergraduate and graduate degrees and three doctoral programs.

The $65.7 million STEM and Classroom Building will contain 121,575 square feet for the study of science, technology, engineering and mathematics. A three-story section will accommodate research labs; a two-story section will house offices and classrooms. The building will include 15 teaching labs for mechanical engineering, physics, chemistry, geology, industrial hygiene and environmental safety. It will also house 12 specialty rooms for mechanical-engineering projects, computer-aided drafting, 3-D printing and more. In addition, the building will have a 100-seat tiered lecture hall, an astronomy observation deck, a 30-seat computer lab – and 13 faculty research labs with room for six more

“This is a big boon to our four-year initiative,” said Glen Houston, interim senior vice president for Academic Affairs and provost. “This new building is going to allow us to have more labs – not only to support our four year initiative but the upper level and grad courses as well.”

Houston added that the new building is designed to support a bachelor of science in mechanical engineering – a degree program long sought by the community’s high-tech industries.

“We designed in all the needed labs and equipment to support that degree program. The proposal is now at the Higher Education Coordinating Board. And this building, with the designs we have in it, will support that proposal and we’re ready to start it in the fall of 2018.”

“We couldn’t even dream of offering mechanical engineering if it wasn't for this building,” said Zbigniew J. Czajkiewicz, dean of the College of Science and Engineering. “We simply don’t have the space right now. The timing is perfect, so let’s start building.”

Construction of the building was authorized by the 2015 Texas Legislature.

The $38.2 million, 81,709 square-foot Recreation and Wellness Center will include academic and recreational wings, open study spaces, casual seating, food service and private study rooms. An indoor, elevated three-lane running track will provide runners a campus view while overlooking two regulation-sized basketball courts and a multi-activity court for indoor soccer, hockey and other sports. The entire court space can be converted into an event or dining hall. It will also feature weight and cardio rooms, two multipurpose rooms for yoga and other exercises as well as three teaching labs and two classrooms. The facility is expected to open in fall 2018.

Besides sports and recreation, the center is will provide a place for students to gather between classes. “This building will provide an opportunity for students to connect and interact with one another, outside of the classroom,” said Darlene Biggers, associate vice president for Student Services. “To form connections and community. We also see this building as contributing to being better partners in the community and strengthening our community ties. This is a turning point for UHCL in developing its student life and the whole college experience.”

William Amonette, assistant professor of fitness and human performance, recalled the program’s early days when, lacking space and equipment, students hoisted sacks of cans for weight training and jogged around the third floor of the campus’ Bayou Building.

“To say that I’m fired up about an 82,000-square-foot building, thinking of where we've come from, is really an understatement. Our students are grateful for the opportunities it will afford them – to better careers as exercise physiologists, scientists, and strength and conditioning coaches.”

Funding for the Recreation and Wellness Center comes from student service fees, made possible by a 2016 student referendum. President Staples credited the Student Government Association and its president, AJ Johnson, for getting the referendum passed. Johnson, in turn, credited the staff and volunteers in the Campus Recreation program.

“If it wasn't for Campus Rec, students wouldn't have even known about the referendum,” he said.

“I’m happy that students decided to pass this. I was very happy they were able to look into the future and see what kind of impact the Recreation and Wellness Center would have on future students. This a big step. These two buildings – the STEM and Classroom Building and the Recreation and Wellness Center – will be a very big focus those future students who are right now in high school.”

The 2015 Legislature, in a bill marshalled by Rep. Dennis Paul of Houston, approved the center’s construction contingent upon the referendum’s positive outcome and support by the UH System Board of Regents.

“It's a great honor to be a part of this,” Paul said. “It’s a joy to get something like this built for our local citizens. To be educated right here instead of flying off to some other place across the land.”

On the drawing board

On April 28, the university plans to break ground on a $24.6 million Health Sciences and Classroom Building at UHCL Pearland Campus. It is expected to open in the spring of 2019.

Later this year, the university expects to begin construction on a $22 million 300-bed student-housing project at UHCL. Rental revenue is expected to pay for its construction. It is expected to be ready for occupancy in late 2018 or early 2019.

The four projects represent the largest new facility development in the history of UHCL.

In addition to Paul, he acknowledged the support of state Rep. Ed Thompson of Pearland, Rep. Greg Bonnen of League City and Texas Sen. Larry Taylor of Friendswood, as well as the Clear Lake Area Chamber of Commerce, Bay Area Houston Economic Partnership and the many community friends and donors that helped make it happen.