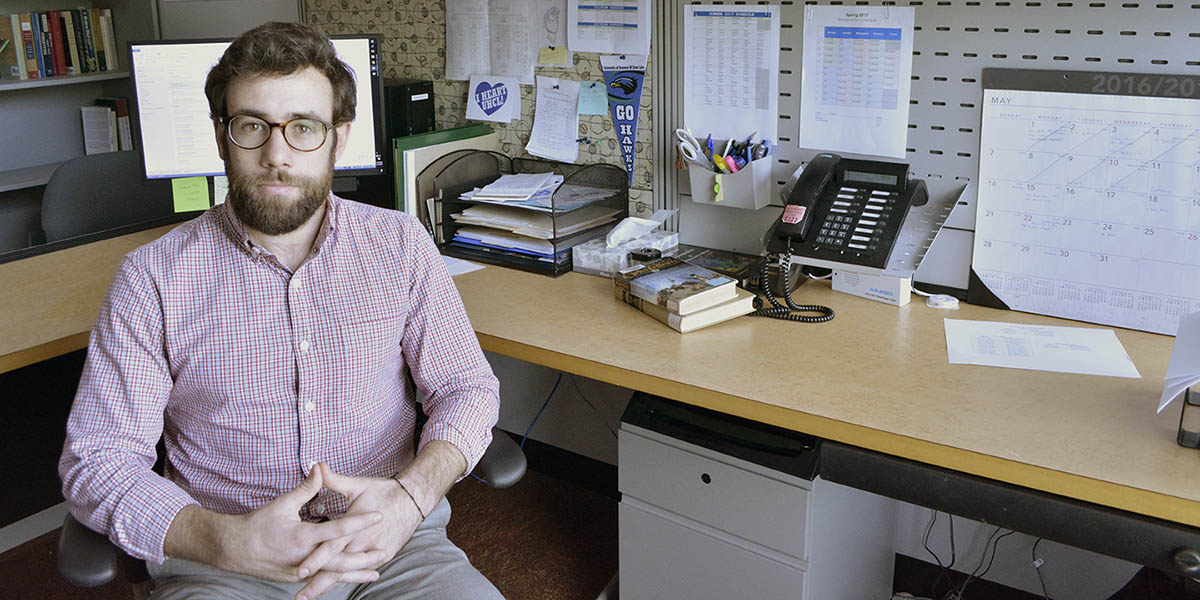 Conor Bracken, published poet and assistant director of UHCL Writing Center, is this year’s winner of the Frost Place’s annual poetry competition. The Frost Place is a nonprofit educational center founded in 1976 in the family farmhouse of literary giant Robert Frost (1874-1963) in Franconia, N.H.

The Frost Place is a nonprofit educational center founded in 1976 in the family farmhouse of literary giant Robert Frost (1874-1963) in Franconia, N.H.  Each year the organization awards one emerging American poet with a fellowship and holds a poetry seminar and workshop for writers. Bull City Press, which sponsors the annual competition, will publish Bracken’s collection this summer.

As fellow, Bracken wins a cash prize, will recite his work at the annual seminar and can take a personal, one-week writing retreat in Frost’s historic home.

“‘Henry Kissinger, Mon Amour’  ... is in turns absurd, hilarious, entertaining, post-traumatic, and terribly sad, drenched in a sort of post-coital shame and yet an unquenchable, awful desire,” said Diane Seuss, renowned poet and this year’s selection judge, quoting from one of the poems, “‘As American … as the cruise missile in his living room we take turns straddling like a mustang,’ Conor Bracken has written the perfect collection for our time.”

“I am so honored to have won this prize,” Bracken said, giving thanks to Seuss, his editors and the Frost Place trustees, “and to my team here at the UHCL Writing Center which has been so supportive and welcoming since I have come on as the assistant director in August 2016.”

Another Bracken poem, “Damaged Villanelle,” was published in the April 24 issue of The New Yorker.

Below is a poem excerpted from Bracken’s upcoming book, “Henry Kissinger, Mon Amour.” (Reprinted with permission.)

Henry talks about the hyenas

Henry talks about the hyenas
he once saw outside Harar,
and the men who fed them scrapmeat
from their mouths and of course

I think of language, of the tongue
and what we hang out of our mouths
because we want something to come

and wrest it from us,
to chew some meaning
out of the marbled half-discarded meat

crumb
by starry crumb
into the dusty cup of it.

Here’s the dirty beat-up Nissan
Henry drives
out of the dented fortress,

of stones as the hyenas approach.
Their mouths open like a book
in which terrible things are written.

“And the darkness?” I want to know:
“How would you describe it.”
“I’d say cavernous,” he replies

“but that would make every hyena’s mouth
a cave-let, so let’s go with velvety”
and we like that.

The night a curtain
we can roughen with one hand
and smooth with the other.